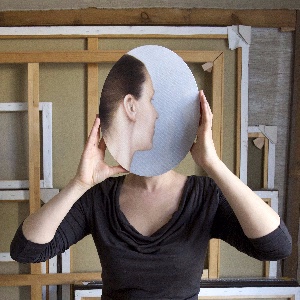 Dorota Sadovská (*1973) appeared on the Slovak art scene in the mid-1990s as a solitary presence, doing figurative painting. She caught attention by her unmistakable signature style, with its emphasis on corporality. Soon she had secured her position on the home scene  and even abroad. Dorota Sadovská began her studies in Bratislava, in the Textiles Department at the Secondary School of Applied Arts, and afterwards in the Studio of Painting at the Academy of Fine Arts and Design (VŠVU), where she took her diploma in 1997 with Rudolf Sikora and completed her doctoral study in 2004 with Dezider Tóth. Concurrently, in 1999 at the École Nationale des Beaux Arts in Dijon she achieved the diploma of visual arts. Both in Slovakia and abroad she won an entire series of awards.

She excels in professionalism, precision, and order. Her talent, which she acknowledges modestly, is regarded by her as a calling. Untiringly she seeks out the progressive trends of contemporary art, not merely reflecting them but actively entering into and influencing them. She consciously oscillates between the media of painting, object, installation, drawing, photography, performance, and interaction with the viewer. Above all she is by nature a painter, who works purposefully with respect for painting in the context of art history. This artist’s domain is the human body, which she conceives from a double angle, as substance, and equally as a bearer of gesture and emotion. A further plane for interpretation of her work is her playing with perspective and an untraditional angle of depiction, e.g. in Far, So Near (2011). A certain provocation, irony and self-presentation represents a criticism both of visual art and everyday reality, especially in her Vivid Dresses (a project from 2013) and Plastic Age (from 2017), and her magazine SADO 1-3 (2005-2015).

Dorota Sadovská is consciously hacking away the form of the hung picture and expanding into space. She explores the limits of the picture as a determination of the viewer’s position, to the point of conscious dematerialisation, e.g. Luminia (1997 in the Synagogue in Trnava). Her dialogue with the viewer aims to provoke thinking about the meaning of contemporary painting. In her spatial painting projects she encourages the viewer to go inside the installation, and thus she creates a situation for awareness of one’s own body, as with A Reading about Liquidity (2019). At the same time, she is opening up the intimacy of corporality, and her figurative work is communicative and easily perceptible.

Dorota Sadovská’s multi-layered work can be articulated in three principal groupings. The first, and the predominant, is her painterly projects based on a classical medium, but achieved with a light touch  by an artist who is thinking in intermedia terms. At the same time, photography is significant for her: she may use it as a sketch or as an autonomous work. A third grouping is performance. She oscillates between the classical media of painting and drawing and the technical image of photography and video. She delights ingetting a game of opposites going and sliding upon the boundaries of media and of themes (traditional and progressively conceived). Her work is targeted at the skin, which she easily converts into lines, exploring the limits of inside and out, the positions of I and we, the subject and the object. Simultaneously she herself enters the creation process with her own body, becoming a bearer of artistic gestures and of her personal artworks. Important here is the artist’s engagement and the authenticity of her expression.

For Dorota Sadovská (and evidently this also accords with her experience of the roles of woman and mother), creative work is the most natural mode of artistic expression.[1] At the same time, in her artistic signature there is an important moment of defiance, revision and criticism: “the subversive aspect”, as it was well described by Jana Geržová.[2] As regards painterly expression, she drew attention in the 1990s by her tilted portraits. Zora Rusinová, in connection with postmodernism in Dorota Sadovská’s work, points to the duality of body and soul. From the spirituality of the early works and the fragmentariness of the body, gradually the artist has become more profoundly interested in the physical side of the human being; not respecting the classical norms, she disrupts the painterly medium and traditional pictorial concepts.[3] For example, in her project On the Interface (Galerie Medium, VŠVU, 2004) those portrayed are easily identifiable, but at the same time they elude us. These paradoxical tilted-heads situations advert to beauty and ugliness, representation and intangibility. The artist constantly develops and repeats the paradoxes, whether in terms of theme or the manner of hanging. She seeks a variety of forms of overhang for the exhibition spaces. Luminia (1997) and Luminia II (2014) are projects that take their departure from the surface of a painting and proceed to where the work is dematerialised, with the artist using the physical attributes of three elementary colours, yellow, blue and red. Via the supporting painterly element of colour and daylight, she models the space inside and outside the gallery. She is going beyond the material limits of the image and creating a site-specific installation.

In her series Angels (from 2008) and Saints (developed from her studies in VŠVU in the 1990s, when the cycle began with St. Agatha), her models are ordinary people. Dorota Sadovská creates a system of working by overviews and numerous photographic sketches, which she easily converts, using visual abbreviations, to the canvas. She concentrates on the naked human body, cleansed as it is from the deposits of civilisation and gender. She comes naturally to the essence of the human being, the soul. Often, inspired by the lives of saints,she manages to dematerialise the body, in such a way that the symbolism issuing from traditional iconography is present only in the signification of gestures. And certainly Dorota Sadovská captured attention in 1999 at the 48th Venice Biennale in Slovak Art For Free, exhibited in the Slovak and Czech Republics’ Pavilion, where she created a situation enabling a selected saint to be tattooed right onto the body, e.g. Saint Lucia or Saint Sebastian.[4]

With the installation of paintings in space, Dorota Sadovská creates a new level for interpretation of the hung picture. Changing the angle of vision, she sets up a mirror for the viewer. She worked with spatial installation of paintings in projects including Space (1999), Bond (2012), and the comprehensive Angels and Saints[5], which she presented in the Nedbalka Gallery in Bratislava in 2016. She works with the image as with an object. Thematically, in her cycles she concentrates on a minimisation of attributes. With a selection of blue and yellow, which are essentially very fragile, she points to the vulnerability of the human body and soul. But Dorota Sadovská goes further in her exploration of corporality, when skin fuses with the painterly canvas and, via the object of clothing, returns to the body as a second “socially conditioned” hide, for example in Painted to Measure (2010) and Like in a Picture (2011).[6] She sets out the historical contexts of the body after its deconstruction, conditioned by personal experience. In her Homograph (a project from 2010), instead of a canvas she uses clothing directly connected with the person portrayed.

This artist, then, works with minimalised expressive means and a cleansed human body; and this in the context of the current mimetic crisis, against a background of developments in post-conceptual drawing and the liquidity of the age, which washes out boundaries between the individual artistic techniques. In the Papercut Drawing cycle (from 2014) she works with the fragility of paper; in a further cycle, Wounded Canvas (2020), she makes use of the spatial possibilities of a frame and a stretched canvas that is slashed and wounded by lines drawn with a cut paper technique.[7] The singularity of these lines in their entirety creates a unique imprint of civilisation.

A second level of Dorota Sadovská’s work involves photography and video. Dominant here are fingers, as symbols of touch and movement, and equally of power. As in her painting, here too she works with skin. In the photographic cycle Corporalities (2003) she focuses on the female body. With an intertwining of haptic and visual experience demonstrated by kneading a female breast like a sculptural material, she adverts to her own experience of the body, while concurrently presenting a certain universal experience of pleasure and pain.[8]This work highlights the gender aspect which social expectation dictates to us. Haptic experience with the hand is symbolically applied in a series of projects, among them Parasites and Rain (2020), a video of falling fingers presented on the multimedia facade EP7 in Paris, which creates contrasts of organic wildness with chilly architecture. Her Parasitesproject has been developing since 1998. Using a variety of poses of hand and leg, the artist played with the feel of the surrounding environment. She cut the photographs and paired them to make symmetrical ornaments, and afterwards populated nooks and corners of gallery spaces with these photo-objects. A certain unnatural naturalness is opening up an intimacy like that of the body, and so place here is highly dominant.

Corporality in Sadovská’s video work is bounded by temporality, and again, as in the photographs, it creates an impression of hybrid organisms. In her video essay Slough (2003) she worked with Martin Burlas, who created a special musical component. The video was presented as part of InOut, a Prague festival of the digital image, on the Old Town Square; the artist aimed at a visual experience of sensuality using haptic sensation. Painterly principles are once again present and employed in the digital image, which captures its form and frames the given staged situation in the given place and time. The performative bodies are presented in detail to the viewer, with a focus on bare skin, which is a bearer of closeness, disclosure and intimacy. The artist opens up contrasts on the level of the skin’s frontiers. She seeks the limits of the physical and mental body, nearness and alienation, experience of subjective and objective reality.

The final, and dominant, level in Dorota Sadovská’s is its performative quality. This artist consciously confronts the painterly medium with the human body. She paraphrases the fashionable arrangement of lifestyle shots.[9] In Vivid Dresses (from 2013) she takes her point of departure from the fashionable gesture and balances between aesthetic artefact and functionality. She puts on dresses of vegetation, which in various phases of growth and desiccation symbolically refer to the life of woman: young, fully grown and ageing. Again, in Plastic Age  (from 2017) she sets in play issues of ecology. Dressing herself in canvas, she produces revised versions of the hung picture (Painted to Measure, 2010). With her fictive woman’s magazine SADO she offers a fine opportunity for the interpretation of her own work, while at the same time creating a certain critical parallel towards the everyday visual environment in which we live. Again, she employs fiction in her BoutiqueS Antishop (a project from 2014), which criticises the commercial reality of the fashion industry. All of these projects carry a powerful engagement. The body, in Dorota Sadovska’s intermedia work, is a bearer of socio-cultural everyday experience. Her working method of a photographic model for painting is used also in the new media. As in photographs, objects and videos, she uses her precisely trained painterly vision and works masterfully with visual abbreviations, overviews, illusions of space, revisions of themes and iconography, and last but not least, with the symbolism of colours. 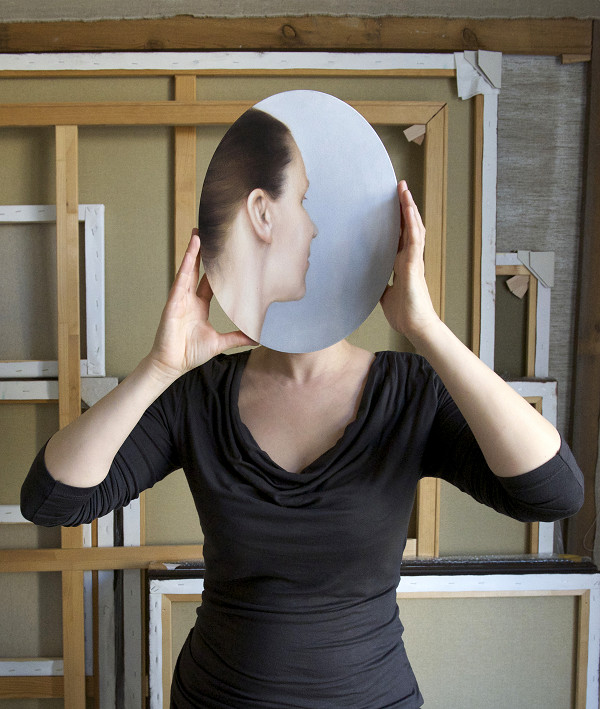 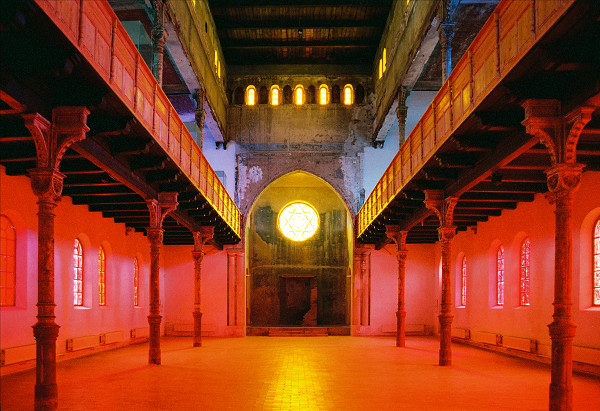 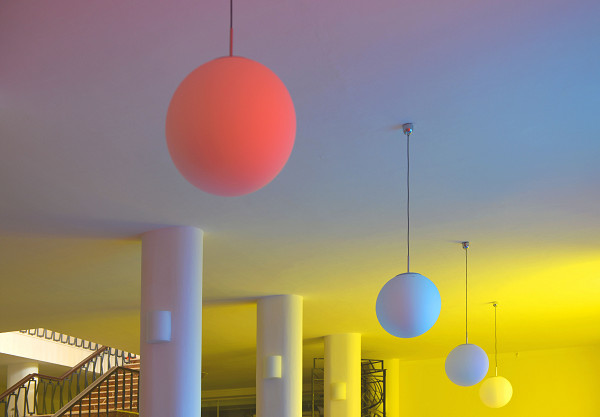 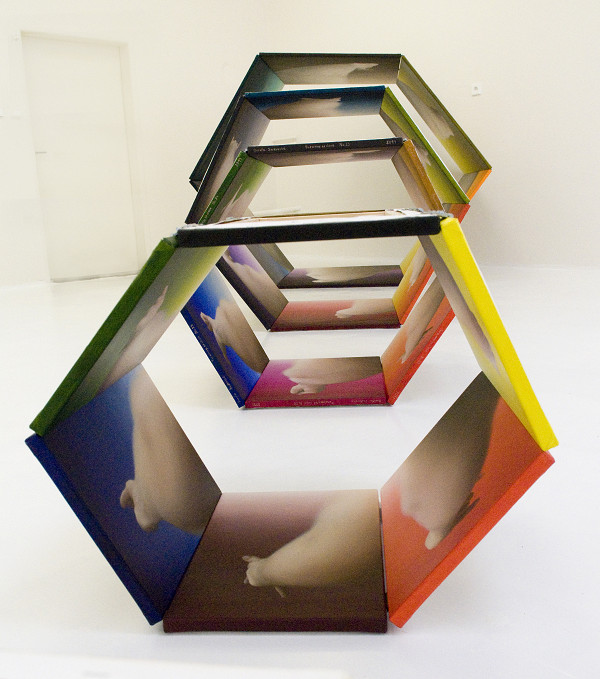 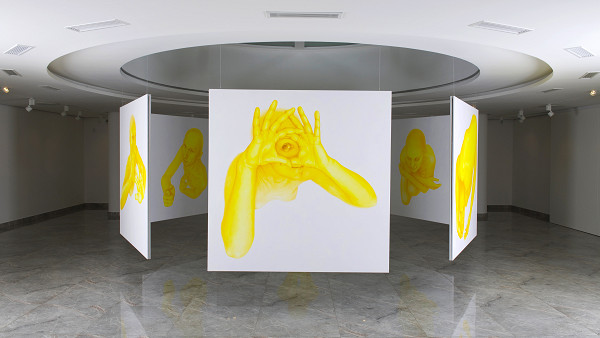 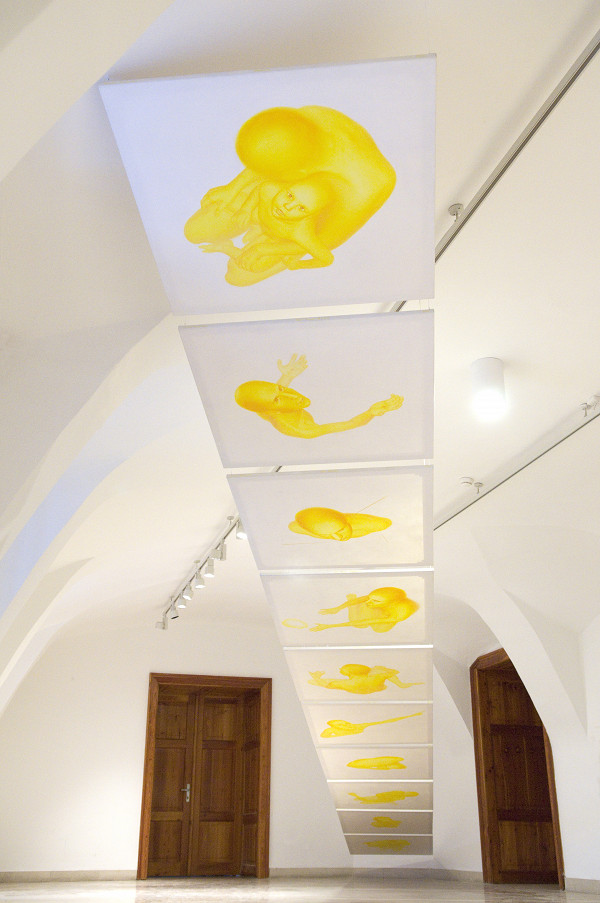 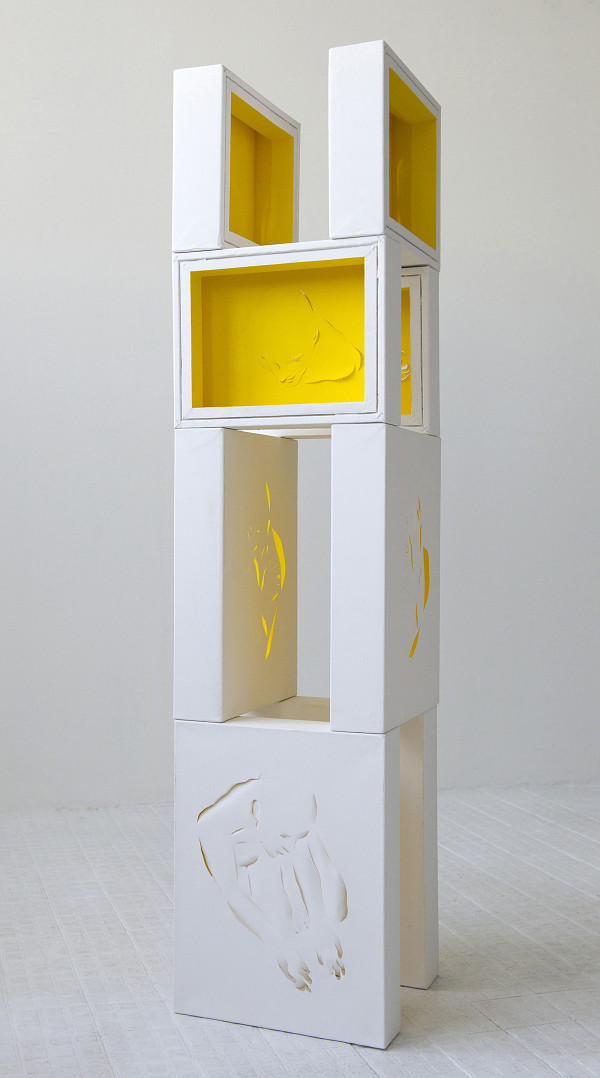 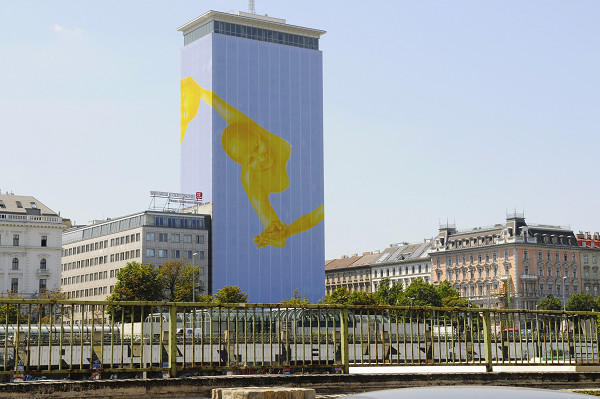 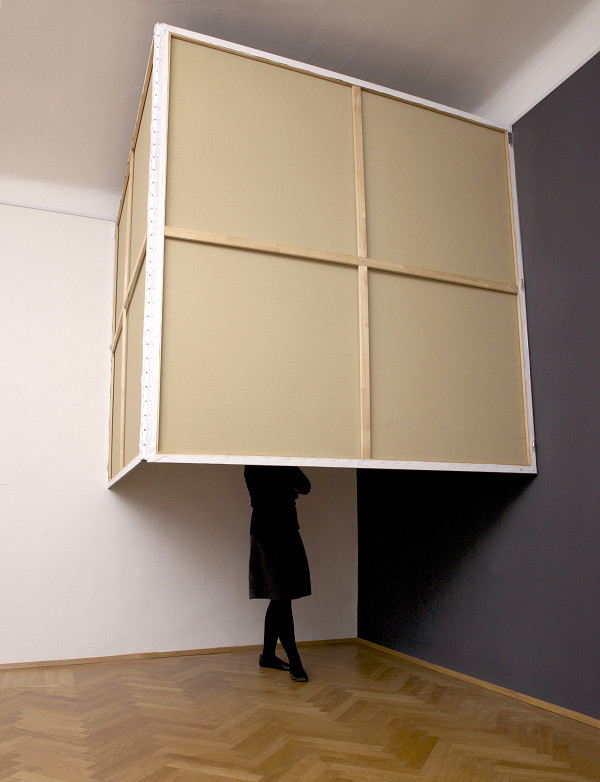 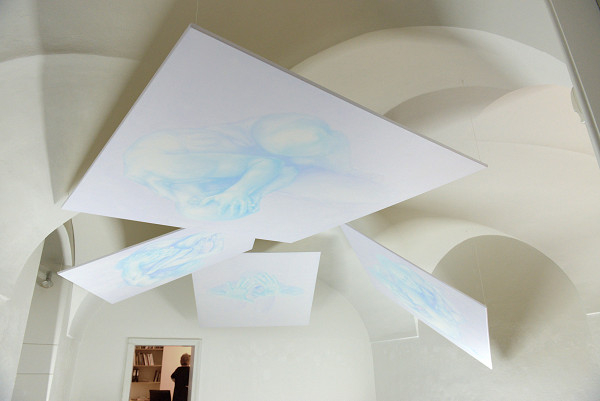 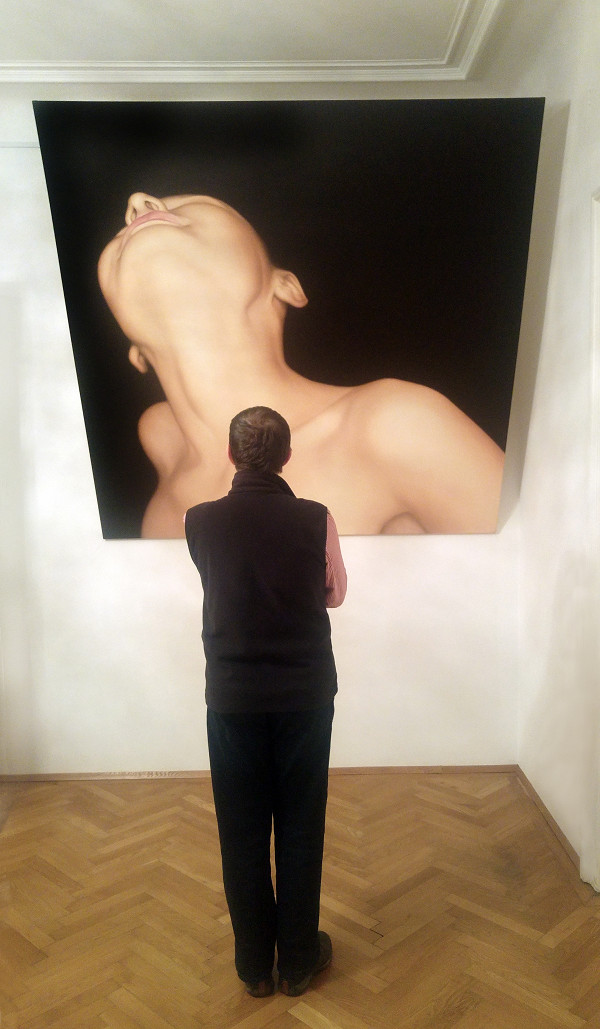 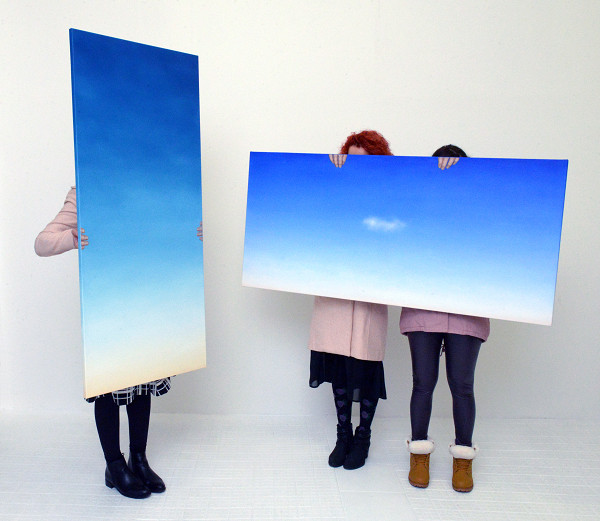 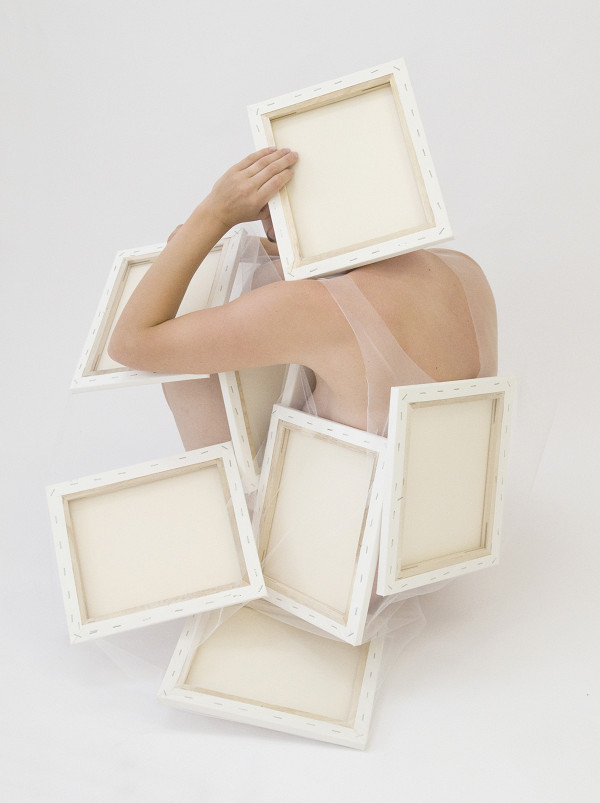 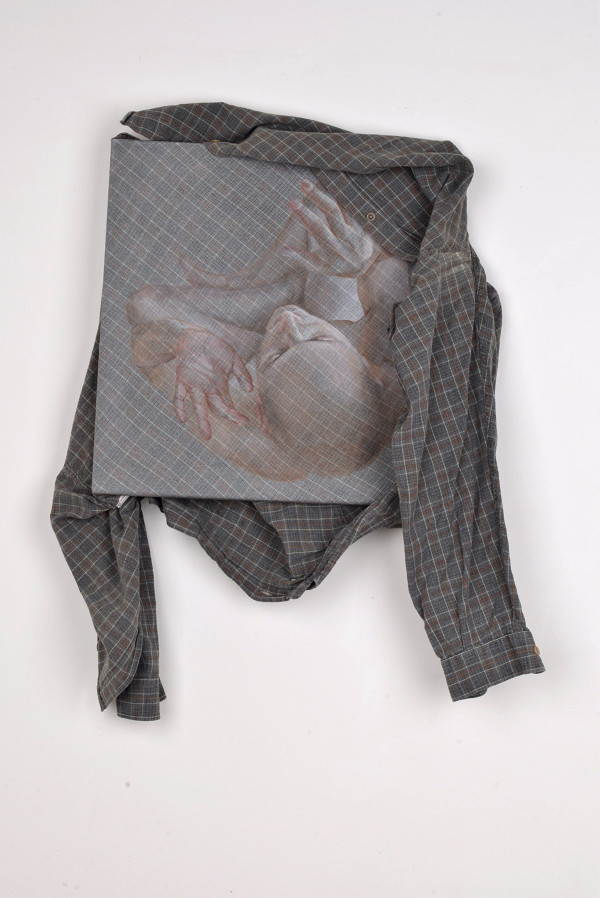 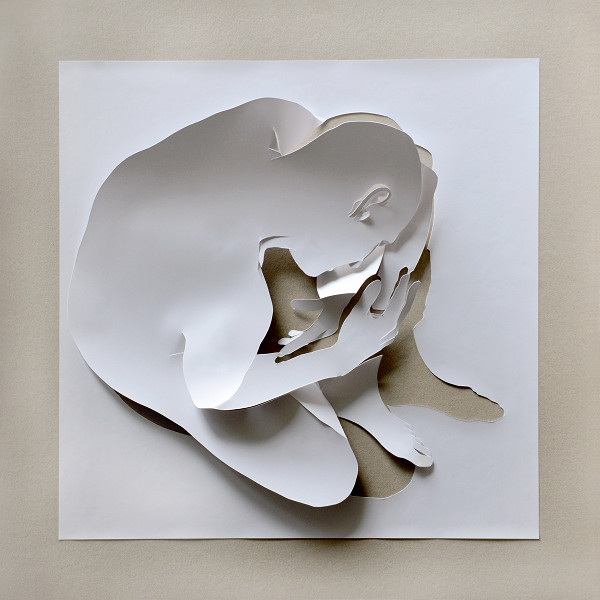 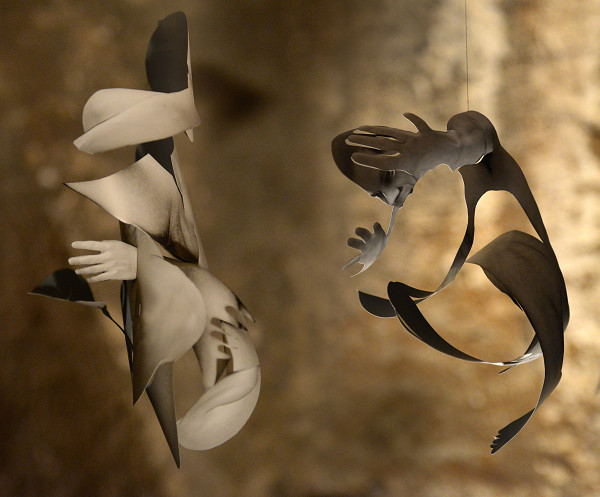 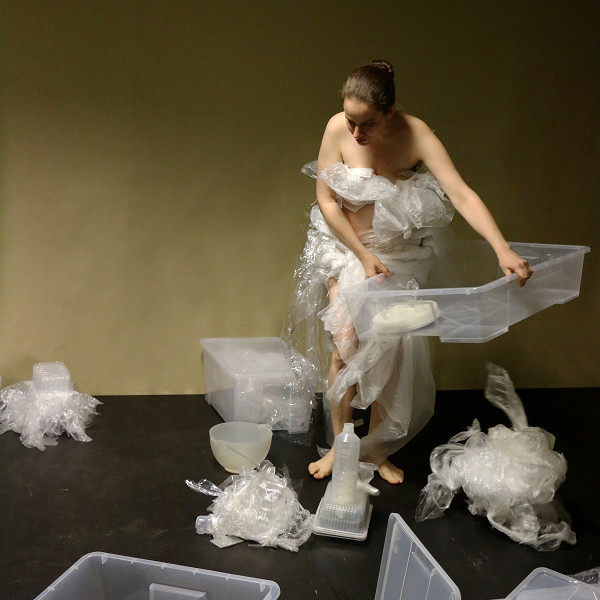 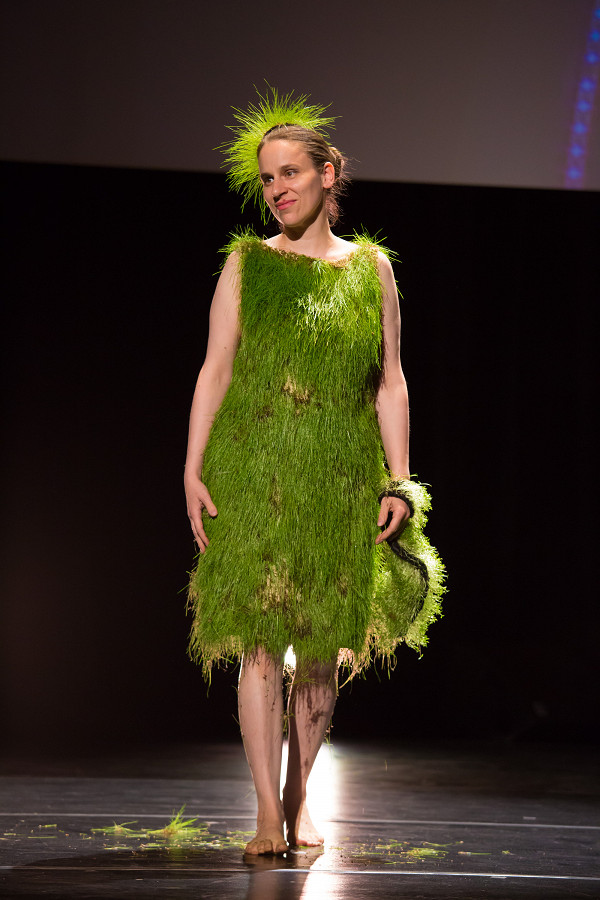 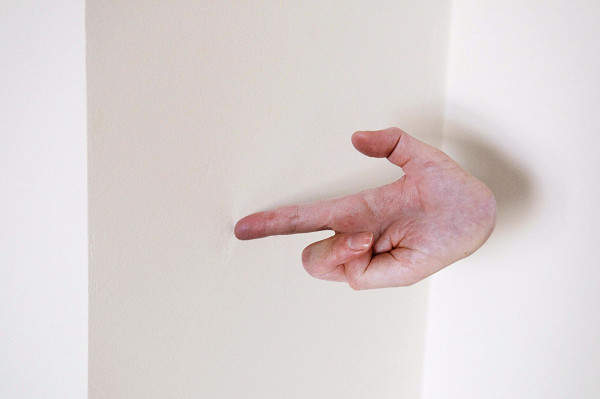 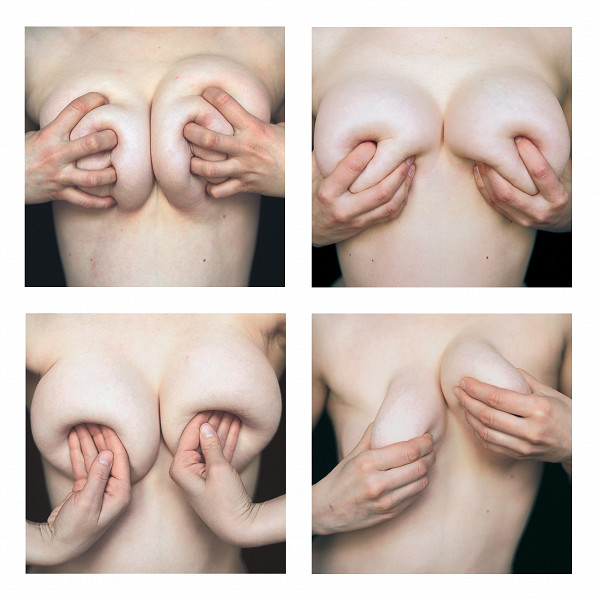 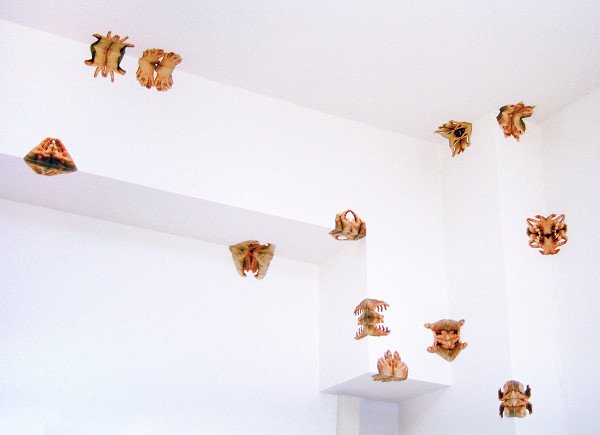 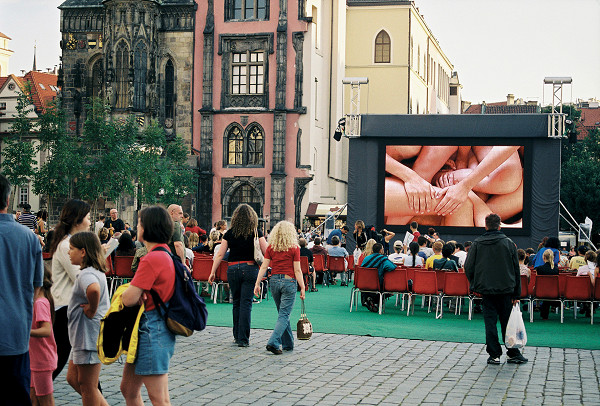 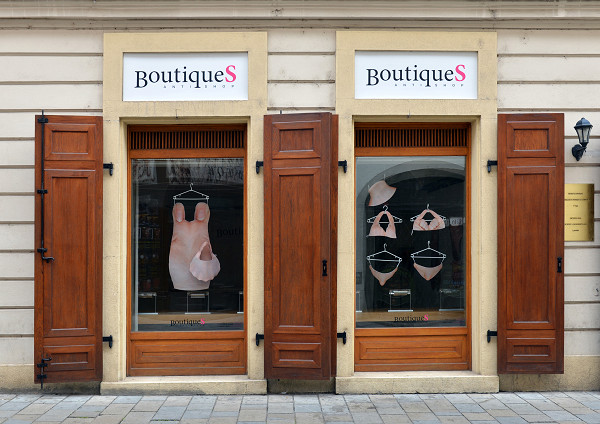 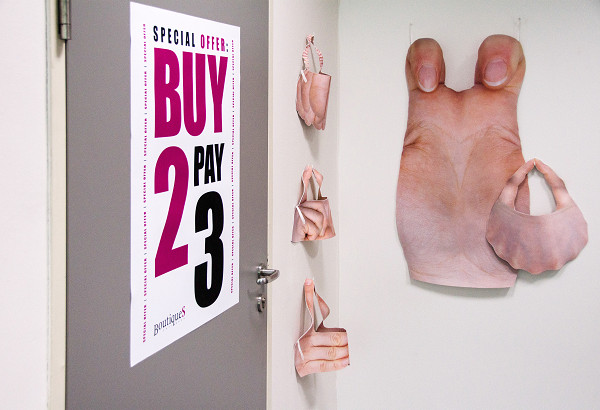 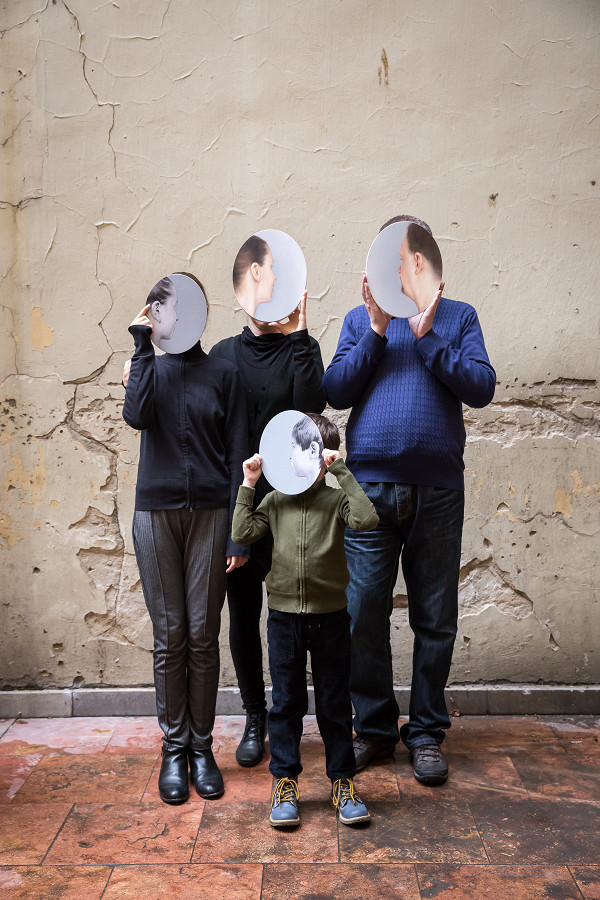