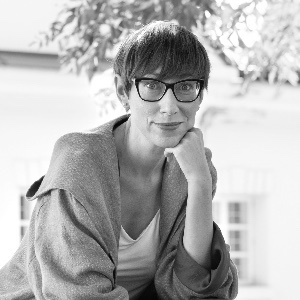 Director of Center for Contemporary Art Ujazdowski Castle in Warsaw (since October 2014), art critic, art historian, curator. Before used to work as a vice-director of the Muzeum Sztuki in Lodz (2008 – 2014). Doctor of Philosophy, she graduated from University of Łódź (history of art), also studied philosophy. Member of AICA (Polish section) and CIMAM. Since 2001 she has published critical texts in Polish art magazines, in the exhibition catalogues and theoretical publications. She curated a first solo show in Poland of Senegalese artist El Hadji Sy – At First I Thought I Was Dancing, reflecting on questions of community and performativity as important aspects of contemporary art seen through a lense of Dakar. Co-curated (together with Jarosław Lubiak) a renowned exhibition Correspondences. Modern Art and Universalismin Muzeum Sztuki (2012 – 2013), juxtaposing two great collections of 20th and 21st century art: of Kunstmuseum Bern and of Muzeum Sztuki in Łódź. She was a director of Łódź Biennale 2006 – second edition of the International Art Biennale – as well as a creator and director of Łódź Design 2007 – a first design and architecture festival in Poland. A curator of visual arts program and exhibitions within the Festival of Dialogue of Four Cultures 2008. During 2004 – 2006 she worked as an art critic and journalist in the Culture Department of Gazeta Wyborcza Łódź – a local issue of the biggest polish newspaper, publishing also in the main issue of Gazeta Wyborcza. Earlier she worked inter alia as a co-editor of a monthly „City Magazine” (2002) and wrote critics and articles for the magazine (2001 – 2005). She lectured on art history and marketing in culture sector and also run MA seminars at the Academy of Fine Arts in Łódź (2007 – 2010). In her theoretical texts she tries to look for a possible relationship between contemporary art and its social responsibility reflecting on a critical role of an art institution in this process.